My experience with the Alpha One Preview weekend

Between Friday 9th July and the early hours of Monday, 12th July, we had a persistent, non-NDA Alpha One test that I put quite a few hours in (but not as many as a lot of people). As this was not under any NDA and there were plenty of streamers (such as Asmongold, who was given a mayor position and invited to a guild by Steven, the CEO), I wanted to share my thoughts and some screenshots so everyone here can share in the experience. It should also give us some good nostalgia down the road when Ashes of Creation launches.

So for me, it was quicker to uninstall the game and re-download the entire thing from scratch than it would have been to update via the launcher. That’s fine because I have speedyinternet. Someone with slower or just average internet speeds might have enjoyed this part a lot less.

A nice thing to note is that the launcher plays the iconic stock music from the Ashes streams (which can be disabled or enabled via a speaker-shaped toggle button).

Thankfully, the characters look nice because there are not a lot of options. Let’s go through them!

There are three of the 9 races:

There are 3 of the main archetypes:

Then, one you get into creating your character by picking an archetype and a race, you usually get three head options, around the same for hair options and maybe some facial hair options.

I went as a human cleric with fluffy hair. Unfortunately, there’s no hide helmet toggle currently so my beautiful mane was hidden by a metal helmet. At least the face and facial hair was good! Something I find interesting is that they’ve already somewhat implemented racial armour styles! When you’re picking a race you’ll notice your starting gear is different per race, even if you are the same archetype.

Step through the portal. Your new life awaits.

So you’ve made and named your character. Great! Now time for the portal. The loading screen may take a while, but you’ll spawn at the foot of a massive portal made of cerulean energy and large rock. 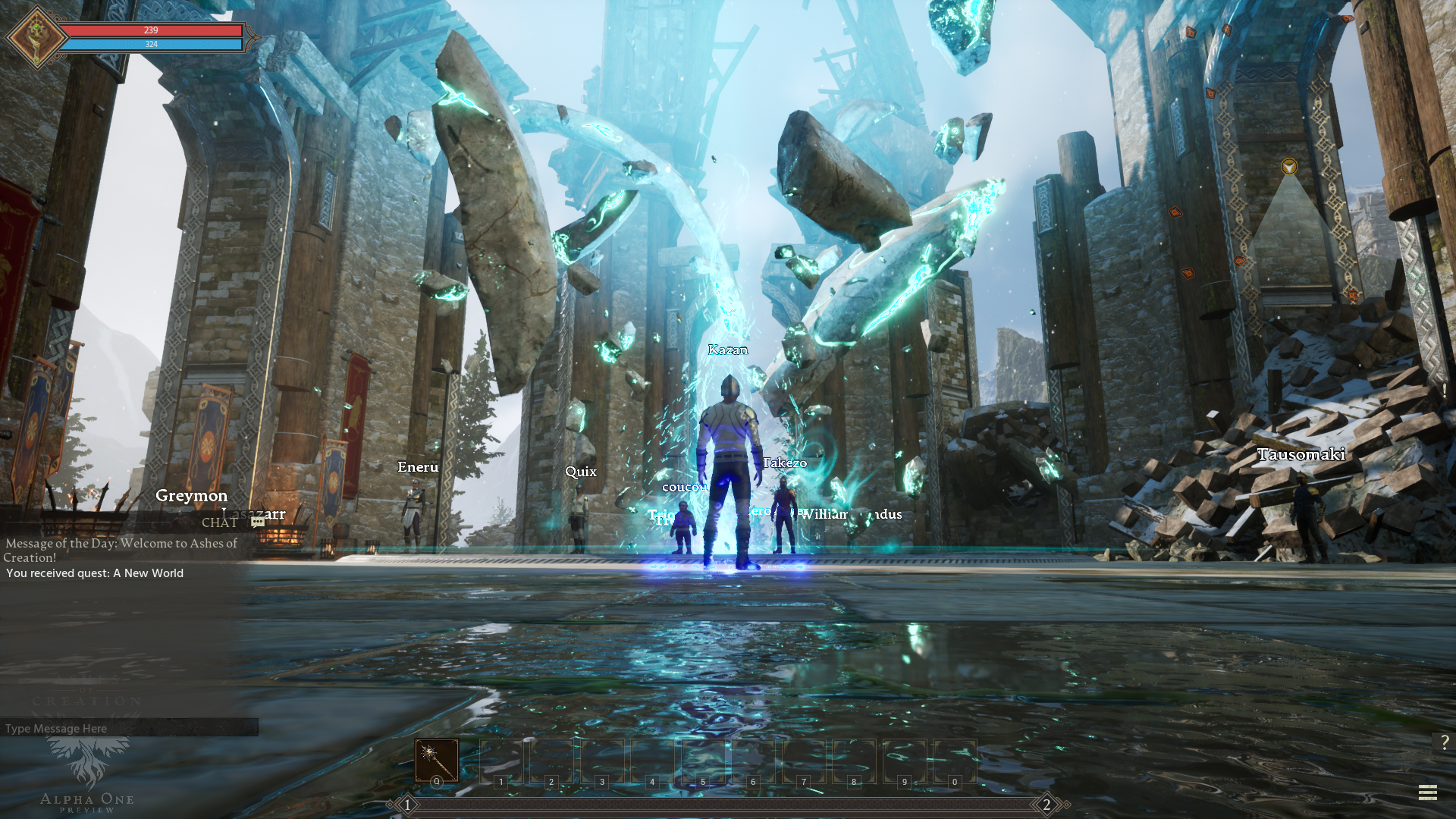 In front of you stands an NPC; your first quest-giver.

You have a brief chat and he tells you who to speak to. From there we walk down the steps and we end up at the portal ruins. It’s like a staging camp for newcomers. There are a bunch of NPCs, a couple of shops and a couple of crafters. Speaking to everyone is your best bet of being introduced to the world and what’s needed of you, as well as getting quests and making a start in the game.

It can be slightly overwhelming to accept all the quests at once. Not all of them are suited to your brand new level 1 character. Some quests are level 15 straight off the bat, but that gives you a goal to work towards (especially while there are no levelled nodes yet).

The camp is overrun with Animated Armours, which provide you an immediate enemy and there are quests and enemies just outside of the starting area. This helps get you going before travelling out to a node.

I only played as a cleric in this test. I am, after all, a healer at heart. I only managed to get to level 7 (out of the available 20), so you can probably take this with a pinch of salt, but the combat felt pretty OK. I prefer tab-target as a whole, but I did try out a bit of action.

As a cleric, I got what seemed to be a varied mix of damage and healing spells. They seemedto be about 50/50 damage/healing (but I only managed to unlock a few skills).

When you’re inside your skill tree (currently bound to J), there are three categories of skills to choose from:

However, the weapon path was disabled.

I didn’t put much into passives as even the first abilities cost 2 skill points and I needed skills. You don’t start with anything other than just hitting with your weapon.

I chose a skill that throws a magically conjured hammer of light to begin with, followed by what seems to be the main healing skill. Then I went for Castigation; a whip of light that damages foes and applies a region to you (which can later be upgraded to also do a one off heal as well, as well as heal nearby party members). Afterwards, I got a regen. I managed to unlock cleric’s resurrection spell but by then I was solo and it was useless to me.

The hammer skill and Castigation dealt a decent amount of damage and felt pretty good to use. They were pretty quick to fire off, had decent range and the effects weren’t blinding. The animation is also pretty smooth. The effects have improved so much since I last played a test. Honestly.

My healing skills were pretty good too, but prolonged healing came at a heavy price to my MP. Cleric so far has been great for short bursts and keeping me going, but at early levels can be a mana-sink. It’s not bad, but it is something to be aware of. There are passives that increase things like mana regen, and certain armour drops come with buffs to total mana and mana regen. I’m sure that if I went out of my way to optimise my build, I wouldn’t notice it too much.

I do think the weapons could do a bit more, though. I started off with a mace, and ended up replacing that with a sword and then a sword and shield toward the end. Your main weapon attack does nowhere near the same as your abilities (which is understandable), but they could stand to do at least a little more. It’s not a huge issue.

Also talking about weapons, melee weapons have a tendency to make you throw yourself forward. Its not too much of an issue when you’re right next to a mob because there’s collision and you can’t go through it. If you want to keep just a tiny bit of distance while hitting your weapon attack? Not possible.

Enemies didn’t hit too hard, unless they were a couple levels higher than me, and I could solo some of the stronger early level mobs (by which I mean mobs with the same level as me but with a lot more health than usual mobs). Mobs that are a few levels higher do indeed hit hard. I was level 6 in an area with level 10 mobs and believe me when I tell you I had to run and hide. A lot.

This is just going to be a short section. To create a guild, you need 500 gold and need to speak to a Guild Master. Once you’ve set up a guild, you can invite people via their character name in a field in the guild menu. You can choose to promote people from Recruit to a Member, followed by an Officer. There’s one more promotion after that but that makes them Guildmaster instead of you.

There are useful guild abilities that you can unlock through the guild menu. These are passives like mana regeneration rates etc. I’m unsure what contributes to guild XP, but there is a guild XP bar and your guild can level up.

There’s also a very useful/annoying (depending on your view) popup that appears every time you log in telling you whether your guild is/isn’t at war. Please make it less prominent, Steven; it doesn’t need to be a huge banner across the screen.

So towards the end of Saturday, the nodes disappeared. I don’t mean they broke, or they were glitching. I mean they were, in their entirety, just gone. The team had to come back and manually level the nodes up with admin powers (which lead to one node now being a dwarf-run node). 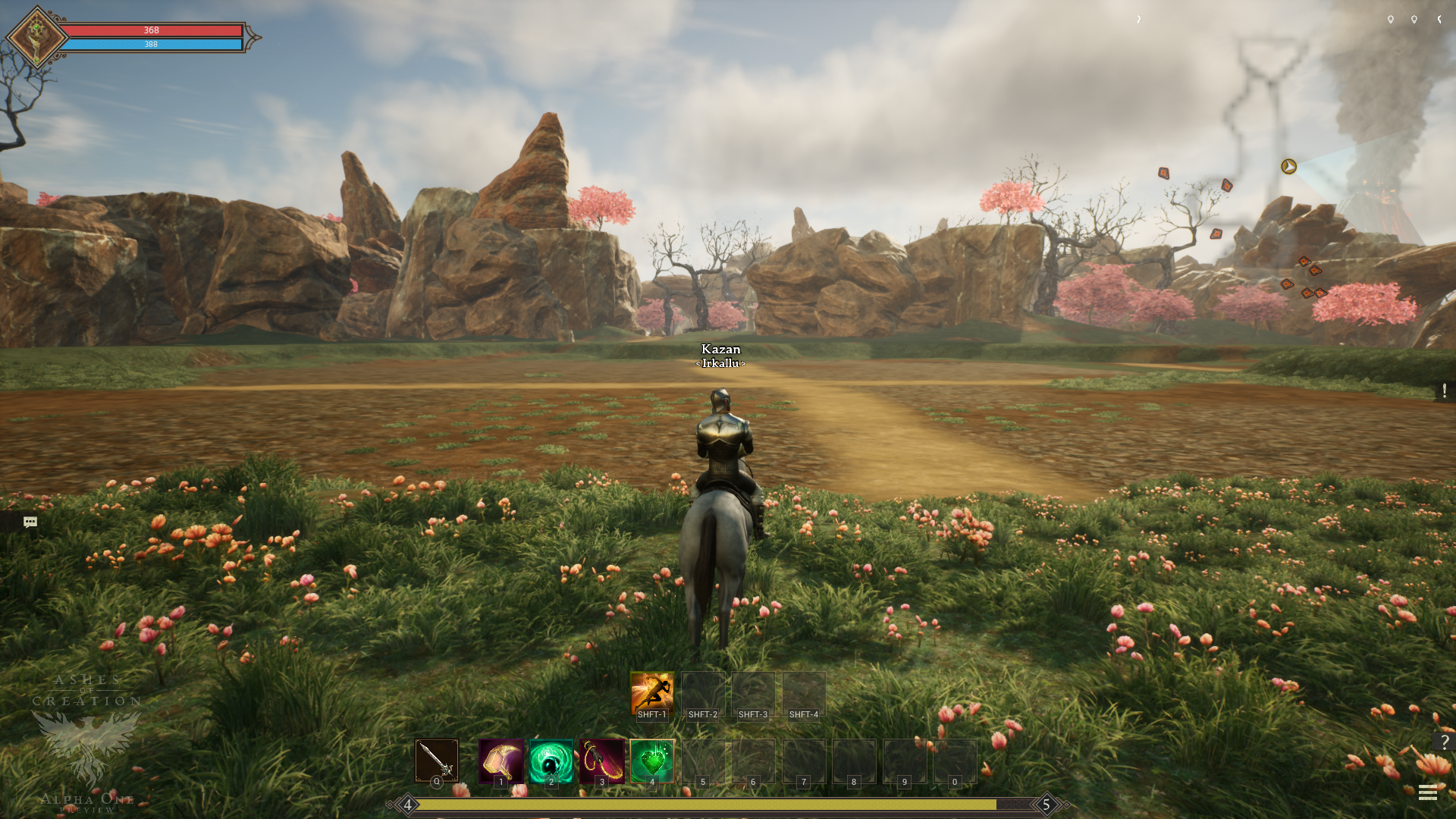 Meeting new people along the way

There is a /global chat in Ashes, so I got to chat with some people while I was playing. It was really exciting to see names in the game that I’d only seen in the official Discord server, or even seeing names in the Discord after seeing them in-game. I loved it!

The streamer BunBox was talking to the world for a while telling us about how similar Ashes is to the concept of Gnosticism.

There’s definitely some cool people out there who we’ll be seeing more of and I honestly can’t wait to get involved with the community as the game grows.

Now that EU servers finally exist, the game ran pretty well without much lag. There were a few issues that will hopefully be resolved as development goes on though:

That’s pretty much it from performance.

Okay so this is always going to be a big one. The world of Verra looks amazing. From snowy mountains to glowing forests and giant crystals, the world is captivating. Truly. Just exploring is fun enough because of how beautiful the world is. I can just imagine myself as a King or Mayor (hint, hint) and riding a flying mount across the skies. I can see myself with you, my fellow guildmates, raiding through warmly lit dungeons and terrifying raids.

It’s easy to get lost in a world that looks as beautiful as Verra does. The Ashes of Creation team are doing a wonderful job. However, there is one thing that bugs me; the textures on your character can see blurry, as if they’re not the right resolution. This also goes for hair. I love the fluffy hair my character has, but it also kinda looks like I’m on minimum settings when I’m on High. Just something I hope gets improved later.

Magic effects are pretty good and have been toned down and refined. They’re no worse than Final Fantasy XIV for flashiness, and a little bit better for not blinding you (I am still a huge fan – fight me).

In general, the effects in the game are lovely to look at. There’s glowing golden orbs around some places and it really lends the environment an ethereal feeling. Then there’s things like the map wall to stop you from going out of bounds. It looks like a huge wall of fire. But pretty. 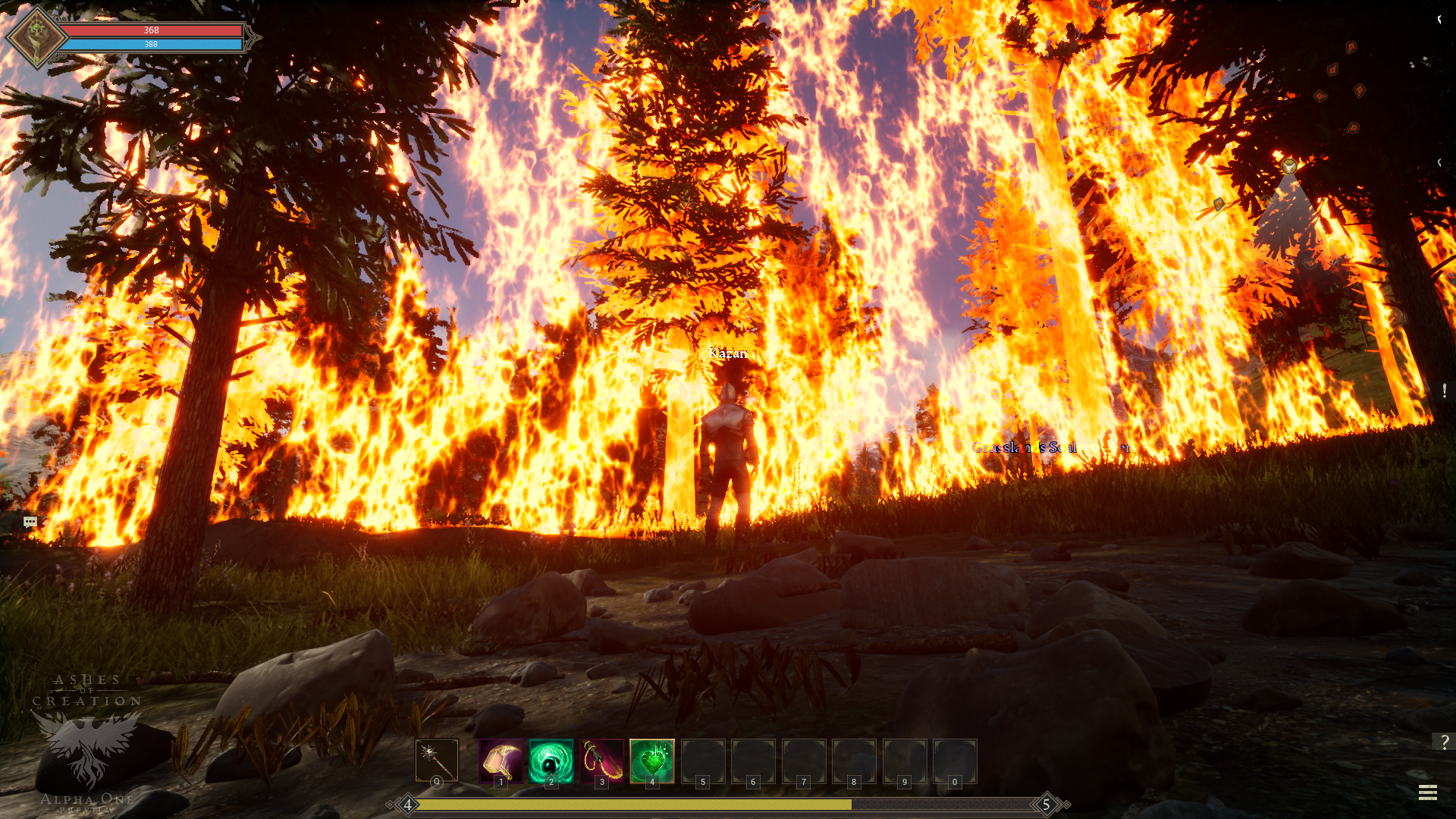 There’s definitely a certain aesthetic to the world of Ashes of Creation. The armour I was wearing throughout most of the test was nice to look at, and looked like something you’d see mid-game. I had these from very early on.

I even got a sword as a level 5 quest reward and it was way too fancy looking for my meagre 5 levels. I love it though. 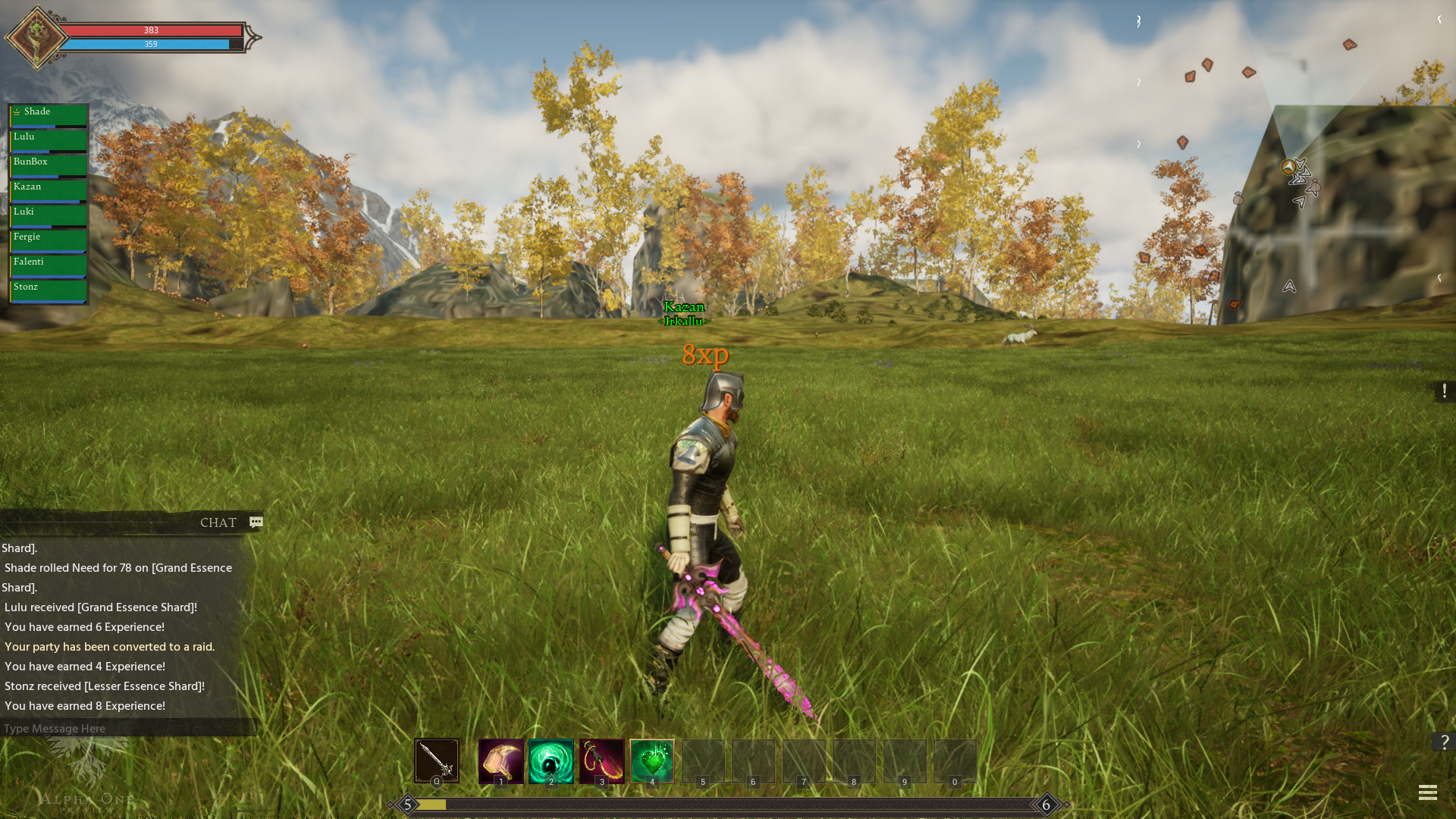 If you’ve read this far, thank you. If you have any questions, or want to chat about any of this then please feel free to send a message in the guild Discord. The game shows a lot of promise, and I’m really hopeful for the future. There are definitely a lot of kinks to iron out though.

I look forward to the tests on Wednesday, and I look forward to playing with all of you, my guildmates, in the future. If you’re not a member of the guild, then why not join? We’ll welcome you with open (virtual) arms.

Join us on our Discord